How to become a coffin confessor? Grave Whisperer: Everything You Need To Know About This Unique Profession.

What Is A Grave Whisper?

Are you looking for a new job that is both meaningful and challenging and that leaves you feeling good at the end of the day?

If you're looking for a unique, exciting, purposeful, and well-paid job, becoming a Grave Whisperer could be the perfect fit.

From gatecrashing funerals and delivering a private message to one of the deceased loved ones to exposing a confronting truth about a dead person's best friend's behavior, no two days are the same as a Grave Whisperer! But what is a Grave Whisperer, exactly?  And how can you become one?

Granted, the information available about this one-of-a-kind profession is limited.

And that's exactly why we've put together this little guide to help you better understand what a Grave Whisperer is and whether or not this could be the perfect job for you. What Is A Grave Whisperer?

Ever heard the saying, "if only the dead could talk"?

Well, that's precisely what a Grave Whisperer aims to do; allowing their dead clients to express themselves from the grave.

More specifically, they're tasked by their clients to carry out their last wish after they pass away. They're requested to become their clients' voice beyond the grave. And there's no limit as to what they would do or say to ensure these wishes are fulfilled (provided the wishes are legal, of course). Sometimes they're funny funerals when the deceased wants special jokes. But the issue is often very serious.

Also referred to as a Coffin Confessor, the job includes things such as: While the job isn't new, it has received a lot of media attention recently, dividing people as some professionals consider these unusual services to be unhealthy and even toxic for grieving families.

But the reality is that a Grave Whisperer's mission isn't to please or to tread carefully to protect the feelings of their client's family and friends.

Ultimately, a Coffin Confessor's job is to respect their client's wishes and become their voice after they've passed away.

Their mission is to stand up for the deceased person and ensure they have their final say so that they can rest peacefully for eternity.

The Coffin Confessor Website in the USA is called Gravewhisperer.

Bill Edgar is one of the most famous Coffin Confessor in Australia.

Gravewhisperer operates internationally and has employees in Asia. Like in China, Japan, Dubai and Abu Dhabi, for example.

We are grounded in Germany, USA, Spain, Austria, Switzerland and Dubai.

Our Confessor-Network is there for you worldwide.

Now, if you're considering working as a Grave Whisperer, you might be wondering what kind of scenarios you could be exposed to on a daily basis.

Here are some examples of some of our clients' stories and how our Grave Whisperers helped fulfill their last wishes.

For anonymity, we've changed the clients’ names in each of them.

Revengeful Prank From The Grave

A Grave Whisperer can help their clients carefully plan their revenge on someone and implement this plan after they die.

Rob used to be a wealthy man. He had worked hard for years as a mechanic to be able to fulfill his dream one day; open his own dealership. The business was thriving, and after a couple of years, Rob opened a second dealership. Fast forward ten years, Rob's business had expanded nationwide, and the successful businessman was running a multi-million dollar operation. Now, Rob was married to Liz and had three kids. Originally deeply in love, Rob had felt Liz drift away over the years as his job would require him to spend more time in the office. Yet, she loved the new lifestyle her husband's success allowed their family to have. Nothing was too extravagant for Liz. From luxury clothes and accessories to fancy dinners with friends and private Tennis lessons, she enjoyed the glamorous life Rob was able to provide.

Unfortunately, in 2020, worldwide events combined with several other factors led Rob's business to go downhill. At the end of 2020, he declared bankruptcy. The money stopped coming in, and the couple had to sell their luxurious home and downgrade. Liz became even more distant than before, and Rob found out she was cheating on him with rich men she'd met at the Tennis club. He even heard from one of his friends that she was trying to find someone else who could offer her the luxury lifestyle she'd become accustomed to.

So, when he learned he was terminally ill, he contacted one of our Grave Whisperers to play a prank on his wife at his funeral. Our team of Grave Whisperers was to announce during the funeral that Rob had stashed away some money for his wife. And so they did.

The Final Nail In The Coffin

Naturally, Liz was delighted by the news.

Two of our Grave Whisperers then arranged a private meeting with her to discuss the details and give her the inheritance she was so eager to receive. To her demise, all she was handed over was a box containing a letter and a pack of tissues. The letter explained how Rob found out about his wife cheating. And it also highlighted his disappointment with her and how he got the idea to plot this final revenge on her.

Turning Death Into A Party

A Coffin Confessor can organize the best party for their clients’ funeral and encourage mourners to celebrate the life of the deceased over mourning their death.

Who said a funeral had to be sad and mournful?

A sad and mournful funeral.

Yet, she knew her loved ones would be grieving after she passed away and wouldn't have the heart to organize a party at her funeral. So, she hired one of our Coffin Confessors to throw a memorable party for her loved ones during the gathering.

Daisy was passionate about France. She had learned French at school and immediately fell in love with the culture. When she was 16, she decided to get a job at a local coffee shop and work nights and weekends to save up for a trip to Paris. She dreamt of strolling the streets of Montmartre and climbing the Eiffel Tower. As soon as she turned 18, she booked her ticket and had an adventure-filled summer that would remain one of her fondest memories.

Upon returning home, she decided to become a French teacher. She spent her life sharing her passion for the French language and culture with hundreds of her students. Every now and then, she would even organize trips to France so that they could practice French and experience the country just like she had when she was their age.

So, when she discussed her funeral arrangements with our Grave Whisperer, she imagined a typical Marie Antoinette dinner party with aperitifs, incredible cheese platters, delightful wine including Champagne, some delicious pastries, and cheerful French songs playing in the background. She had also pre-recorded a message for everyone and asked our Coffin Confessor to play it before the party started.

Everyone was taken aback by how wonderful Daisy still managed to make them laugh even after she'd died.

So, thanks to our team of Grave Whisperers, her friends and family said a last "Au revoir" to Daisy, their hearts filled with love for her and their bellies full!

Celebrating Love From The Grave

A Grave Whisperer can help their clients express their love to their loved ones as a little reminder after they die.

Dan and Anita were deeply in love. They met in their 20s at university. Dan was smitten by Anita the minute he laid eyes on her and decided he would marry her one day. Three years later, his dreams came true, and they said "I do" in front of their family and friends. Unfortunately, Dan and Anita could never have children, but this tragic reality somehow strengthened their love for one another.

They spent the next 15 years happy, going on little outdoor adventures on the weekend with their adorable dog, sailing, and gardening together. Dan and Anita's love for nature, the outdoors, and adventure was unparalleled.

That's why when Dan learned he wasn't going to beat his cancer, he decided to contact one of our Grave Whisperers to help him plan surprises for Anita for the next ten years. What's The Process Like When Hiring A Coffin Confessor?

Now that you've got a better grasp on what a Grave Whisperer and Coffin Confessor do and how they help their clients fulfill their last wishes, let's review what the actual process of hiring a Grave Whisperer looks like.

There are usually three steps to the process:

1. Discussing Your Client's Needs And Making A Plan Together

Sharing your deepest secrets with a stranger can be sensitive, and it can also be overwhelming. Whether your client's wish is to take revenge, share their truth or simply express their love to someone, in particular, they might not have a clear idea of how to carry out their wish.

That's where your listening, creative and problem-solving skills come into play.

Your role as a Coffin Confessor is to actively listen to their story, ask them questions to ensure you have the full picture, and suggest a suitable plan of action based on the information they've shared with you.

2.  Prepare For The Big Reveal

Once your client is satisfied with the plan you suggested, it's time to get to work!

During the preparation phase, you need to gather all of the materials and resources you need from your client to execute the plan. After all, they might die soon, so it's imperative that you have all you need before they pass away to fulfill their last wish after their death.

In addition to gathering materials from your client, this is also the time for you to contact contractors and other companies to make all the arrangements necessary for the big reveal.

The day to carry out the plan you and your client have carefully prepared has arrived. They entrusted you with a very special mission to them, and you've accepted the challenge.

So, whether you're about to gatecrash their funeral, send a gift to someone who was dear to them, or put a revenge plan into motion, this is your time to shine and carry out your client's last wish to the T.

Why Work With The Coffin Confessor?

At the Coffin Confessor, we take death and secrets very seriously. We believe people have a right to speak even after they're dead so that they can express their feelings, whether it be for the first time or one last time once they're gone.

Now, we know how sensitive our clients’ secrets can be, and we're committed to providing the highest level of discretion for every single one of them. Part of our mission is to protect secrets until the day our clients want them exposed.

What's more, no request is too complex for us, and we thrive on ensuring that last wishes are fulfilled no matter what (provided that it is legal). That's why if someone needs help designing and implementing the perfect plan after their death, we give our team of highly-skilled and talented Grave Whisperers complete freedom to let their imagination run wild to carry out their important mission.

So, if you're looking for a one-of-a-kind job where two days are never the same and want to evolve in a supportive workplace that encourages creativity, and autonomy, don't hesitate to contact us now. 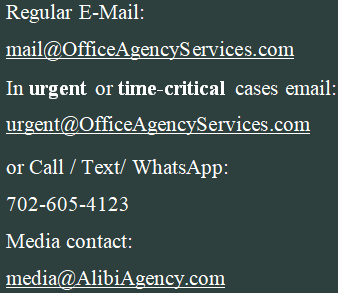 This Website for Grave Whisperer and Coffin Confessor is a project of the worldwide Alibinetwork.